Lishuania is a small country.There are four ethnographic areas in Lithuania that vary considerably in customs and dialect: Žemaitija ( Samoghitia), Aukštaitija, Suvalkija and Dzūkija.The people in each of these parts also differ in their character and habits.

The character of Samoghitians was determined not only by their history but also by the landscape. In the Middle Ages they did not have large castles or fortresses, so their best protection against enemies was patience and courage. Their unity and appreciation of their language and traditions was stronger than any fortress, so it is no wonder that Samoghitia was the last bastion of paganism in Europe. Its people protekt the key to the Lithuanian spiritual heritage up to the present day.

The Aukštaičiai ( Highlanders) live in a hilly region formed by glaciers. The impressively green countryside today abounds with lakes and castle hills, interwoven with legends. On the banks of rivers and lakes small villages and towns emerge out of the greenery. The Highlanders are goodhearted and talkative, they always receive guests joyfully, treat them with beer and tell many tall tales.

The Suvalkiečiai are famous for their rationality, large households, extremely careful budgeting and respect for cleanliness and order. Their dialect is the basis of standard Lithuanian. There are innumerable anecdotes about their stinginess- jokes which they love telling themselves. There is a joke, that any guest in these parts of Lithuania, who ventures into someone's yard to ask for a directions should not be surprised if the owner asks him or her to show some identification. After all, order is order.

The Dzūkai are a good hearted and trusting people. Green forests far from the large cities cover their countryside, have formed their unique character and their perception of themselves, of life and its system of values. Their boundless optimism helps them to withstand the harsh winters, to feel reborn with nature in spring and to take pleasure in the abundant sylvan treasures of the autumn. The old Lithuanian crafts have been preserved in Dzūkija.

Lithuania has retained not only one of the most ancient languages in Europe but also its old folklore, customs and traditions.
Different ethnographic regions of Lithuania have their own favourite traditional festivals and holidays.
Žemaitija, the Lithuanian Lowlands in the western part of the country, is famous for its Užgavėnės (Shrovetide) masquerades when groups of both children and grown-ups, disguised as animals , birds, and fantastik beasts can be seen roaming the streets of villages and towns. Žemaitija is also famous for its woodcarvers specialising in masks for the Užgavėnės carnivals.
Dzūkija, the south-eastern region of Lithuania, is the land of folk songs and singers. Song festivals in Dzūkija every year draw hundreds of individual folk singers and ethnographic groups.The Dzūkija people are also widely known as good weavers of traditional linen textiles, used for making Lithuanian national costumes.
Užnemunė, the south-western part of Lithuania, boasts of not only rich soils and well-to-do farmers but also of the old traditions of the kanklės music. 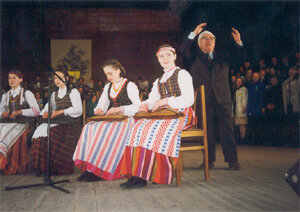 It was on the verge of extinction but the tradition was retained thanks to a few enthusiasts who revived it before World War II.
The best and most numerous groups of folk music performers are concentrated in Vilnius.
Among the many folk music festivals to be seen there, "Skamba, skamba kankliai", held the last week of May for 15 years already, is the most popular. During the week the squares, streets and ancient courtyards of Vilnius resound with folk music performed both by the lokal and visiting groups from other parts of Lithuania and abroad. A folk art fair is timed to coincide with the festival, too.
Among the old traditions that have been revived in the recent years mention should be made of St. Casimier's Day, celebrated on March 4. The most popular part of the festival is the "Kaziukas Fair" extending for a fortnight and offering a host of handicrafts. Especially valued are works by woodcarvers.
The 1st of April is a traditional day of pranks. People usually join in various games and participate at evening competition held for the best "practical" jokes and humorous performance.
Another specialty is the "Verbos" or Easter Palms, typical of the Vilnius region. They are made of dried colorful plants, blossoms and herbs. On this Sunday before Easter, juniper twigs are brought to church to be blessed, and, according to traditional, are only then believed to protect from sickness and evil spirits. In the Vilnius region, the use of Juniper twigs have been exchanged by decorative interwoven bunches of multicolored dried plants, flowers and corn ears today regarded as authentic works of folk art.

Rasos June 24th is a festival in marking the summer solstice. It was first recorded to have taken place in the 14th century. It was believed that on this the shortest night of the year plants and water acquired special powers for healing illnesses or the ability to increase the fertility of farmland. Customs associated with the feast have retained their popularity to this day. Bonfires are lit, wreath are floated on water, and every year people search the forest for the legendary blooming flower of the fern. The festival ends with the rising of the sun the following morning.

In Trakai Christmas Eve is celebrating on December 24th as in whole Lithuania. Christmas Eve and the traditional evening meal is family occasion. Preparations for Christmas Eve take all day. The house is cleaned, food prepared not only for the special supper ( Kūčios) but also for the first day of Christmas. People fast and abstain from meat. Lithuanians still adhere to this custom though the Church has abolished abstinence: food may be eaten as often as desired, even meat. It is vitally important that the Christmas Eve dinner (or supper) include no meat dishes because it could then no longer be called Kūčios but an ordinary meal prepared for any other evening.

On Christmas Eve the house must be thoroughly cleaned, all the bed linens changed and all family members must bathe and don clean clothes before the evening meal.For the Christmas Eve dinner, the table is prepared as follows: a handfull of fine hay is spread evenly on the table. This is a reminder that Jesus was born in a stable and laid in a manger on hay. The table is then covered with a pure white tablecloth, set with plates and decorated with candles and fir boughs. A small plate with as many Christmas wafers as there are persons present is placed in the center of the table. In some Lithuanian regions these wafers were called God's cakes (Dievo pyragai) for they were obtained from the parish and were imprinted with Biblical scenes of Jesus' birth.

All family members make an effort to come home for the Christmas Eve supper, even from a distance. Perhaps not so much for the meal as for the sacred family ritual which draws the family members closer, banding everyone and strenghtening warm family ties. If a family member has died that year or cannot attend the meal (only for very serious reasons) an empty place is left at the table.

A plate is still placed on the table and a chair is drawn up, but no spoons, knives or forks are set. A small candle is placed on the plate and lit during the meal. It is believed that the spirit of the deceased family member participates in the Kūčios along with everyone.

Twelve different dishes are served on the table because Jesus had twelve apostles. All the dishes are strictly meatless: fish, herring, šližikai with poppy seed milk, kisielius (cranberry pudding), a dried fruit soup or compote, a salad of winter and dried vegetables, mushrooms, boiled or baked potatoes, sauerkraut and bread.
When everyone is assembled at the table, a prayer is said. The father then takes a wafer and offers it to the mother wishing her a Happy Christmas. "God grant that we are all together again next year." The mother responds and breaks off a piece of wafer. She offers the father her wafer in return. The father then offers his wafer to every family member or guest at the table. The mother does likewise. After them, all the diners exchange greetings and morsels of wafer.

Christmas Eve is rich in prognostications. Here is but a small sampling of prophecies and divinations:

We have been celebrating 100 days festival, Shrovetide, the day of the Earth, the Birthday of the gymnasium, the Teachers' day, Easter, the Last Bell, presenting of school-leaving certificates and others for many years.
Sports are very popular as well: night basketball tournament, sports and health festival held in June.

The Birthday of the gymnasium 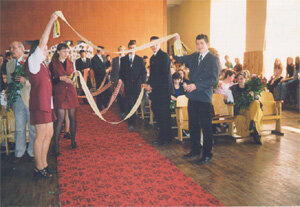 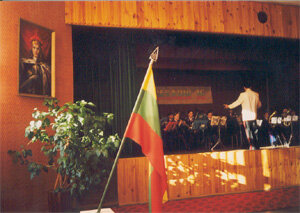 The Act of Independence was officially declared in Vilnius on February 16, 1918. Several more years of battle for freedom were required before the work of recreating and re-establishing an Independent Lithuanian State could begin. An independence, which endured for a period of two decades.The secret protocols of Ribentrop-Molotov Pact prompted three more occupations, Soviet followed by German, and then Soviet once again. An armed partisan resistance continued another decade before its final defeat, and eventual adaptation of pacifistic resistance.

On March 11, 1990, Lithuania again declared its status of Independence. Another year and a half of subversive and bloody events followed by Lithuanian Independence was recognized by all the world's countries. And another two years passed before the last soldier of the occupational army retreated from Lithuanian territory. The re-establishing and recreation of the State has begun anew. Lithuania has regained its position amongst European countries.

Present day Lithuania is grounded on the principles of an independent democratic Republic, which is administered by an elected Seym and President, and a Government appointed by both branches.